skip to main | skip to sidebar

The tent is up, the wagon is ready for hay, a handful of boats are in the water, and Phil’s Chicken House has the chicken marinating. Now the only thing missing is you!

Be sure to come to Sky Lake for our Annual Open House, this Sunday, May 18 from 1:30-5:00pm. Besides getting to visit with friends old and new, you’ll also be able to take a guided tour, go on a hayride or boat ride, make a craft, meet some of the directors from this summer, register for camp, and more.

Open House is free and open to everyone! The finger-lickin’ good chicken BBQ (prepared by Phil’s Chicken House!) is available from 1:30-5:00 for $8.50 a person.

Hope to see you on Sunday!
Posted by Sky Lake Camp & Retreat Center at 2:44 PM 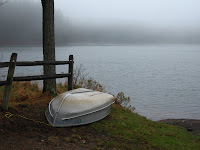 It may have appeared to have been a rather dreary day outside, but that didn’t stop dozens of volunteers from showing up for Work Day on Saturday, May 3. Fortunately the weather did keep the black flies from making an appearance!

Volunteers worked on a variety of projects—from redoing bunk beds and cabins to painting to cleaning out the garden beds. Sky Lake looks a lot better thanks to the efforts of all the volunteers. Be sure to check out the results of their handiwork during Open House on Sunday, May 18th. 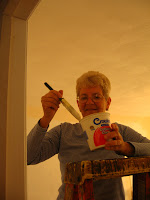 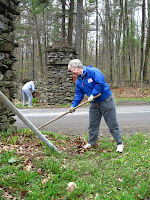 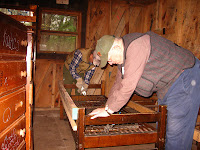 The warm temperatures the last couple of days finally melted the ice on the lake. So, it's now official--spring is here! This means that it won't be long until Volunteer Work Day on Saturday, May 3. Work Day is a great opportunity for folks who would like to do volunteer work, but might not otherwise have the time to commit to lengthy projects.

Volunteers are welcome to come and go on their own that day. Coffee, doughnuts, project descriptions, and signup sheets will be available in Founders' Lodge starting at 8am. We'll gather back in Founders' for lunch at noon. Most volunteers then spend an hour or two finishing up after lunch. You or your group can sign up online at www.skylakecenter.org or by calling the Sky Lake Office at (607) 467-2750. To make sure there's enough food, please register by Monday, April 28.
Posted by Sky Lake Camp & Retreat Center at 9:44 AM

The theme of the first retreat was IMPACT—more specifically the impact God has had on us and the impact God expects us to have on the world. Using a variety of Bible stories as our guide, we explored the ideas of creation, call, and stewardship. The torrential downpours (at least the rain seemed like that!) may have kept us from walking around the lake Saturday morning, but it didn’t stop us from taking part in one of the favorite activities of the retreat. Each “class” was given an imaginary $50,000 by the “Levert Family Foundation” under the condition that it be divided between one to two eco-justice ministries. The clean water project in Haiti and the Nothing but Nets campaign were the top picks from the ministries presented.

The second retreat focused on how God calls each person. We began with trying to figure out different text messaging phrases, that culminated in “u r cllD”. (For you non-txt savvy folks, that would be “you are called”.) The small groups were given different Biblical characters to explore and a bag of random props. From there each group presented a short skit based on their character. The confirmands did a great job energetically portraying the calls of Moses, Esther, Jonah, the boy who shared his lunch, and the Woman at the Well. Of course, having s’mores right before the performance might have helped… After exploring spiritual disciplines and planning worship, most of the group went for a walk around the lake. Actually the hike turned more into a sliding adventure as the weekend’s rain had turned what snow was left on the path into ice! But we didn’t let that stop us from having an absolute blast.

Information on next year’s confirmation retreats will be distributed to pastors next fall. So stay tuned…
Posted by Sky Lake Camp & Retreat Center at 2:50 PM

“Because here God starts the conversation!” An eighth grade camper once shared these profound words when asked what made Sky Lake so special. For the past 61 years, campers have been experiencing this “conversation” at Sky Lake. And while there is plenty of fun stuff to be had at Sky Lake, camp is about more than that—it’s about experiencing Christian community, experiencing God’s beautiful creation, experiencing the very presence of the Spirit. The late Rev. Edgar Singer is credited with calling Sky Lake “the additional classroom for all the churches of the Wyoming Conference.” Campers of all ages and abilities encounter an environment where they can apply what they’ve learned in church and Sunday School and challenged to take their faith deeper.

Register for one of these camps today:

Registration forms and information on each camp are available online at www.skylakecenter.org/summer2008 or by calling the Sky Lake Office at 607.467.2750.